Agreement in principle for Ronaldinho transfer

AC Milan and Barcelona have reached an agreement in principle over the transfer of Ronaldinho to the Italian club. The Brazilian will take a medical examination on Wednesday in Milan. 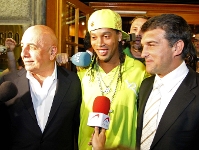 Laporta, AC Milan vice president, Adriano Galliani, and the players’ agent, Roberto de Assis, left the club offices to announce an agreement in principle for the transfer of Ronaldinho to the Serie A club.

The 28 year old player has the club’s permission to travel to Milan on Wednesday to take the corresponding medical tests.

21 million plus 4 million in bonuses

The principle of agreement finally established a transfer fee of 21 million euros, plus 4 million more in the form of performance-related bonuses depending on AC Milan’s qualification, in future years, for the Champions League.

Director of football, Txiki Beguiristain, announced that this agreement in principle was reached thanks to the player renouncing his right to 15% of the fee. He added that the club had already been working with the idea in mind that Ronaldinho would not be with them this season. “We had made our plans without him” he said. 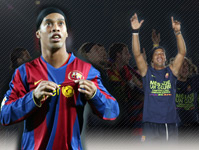