Japanese singer and actor Yu Shirota has officially been made an honorary fan of Barēa in Japan after meeting Sandro Rosell and the first team players. 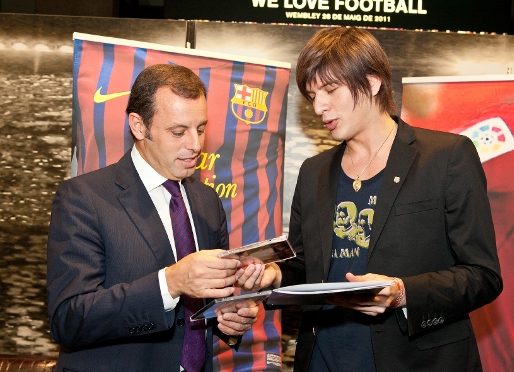 Yu Shirota Fernįndez is only 25 years old and started out as an artist very young in life. He was a member of a group called D-BOYS (2004), and appeared in the ‘Sailor Moon Musicals’ (2004), and the musical series ‘The Prince Of Tennis’ (2005/2006).
25 year old Yu Shirota Fernįndez, the son of a Japanese father and mother from Extremadura in Spain, is a huge star in Japan. The television actor and singer is also a huge fan of Barēa, saying that he has fallen in love with the way they play. He lived in Barcelona for a few years when he was young, and has started following FC Barcelona again in Japan. Yu Shirota, being a massive name in Japan and with maternal roots in Spain, signed a declaration today by which he agrees to be a representative supporter of the club in Japan. The president of FC Barcelona, Sandro Rosell, welcomed him to the Camp Nou and expressed his pleasure to be able to invite him to enjoy the team’s 5-0 win against Mallorca this weekend.

Yu Shirota also took in a guided tour of the Barēa Museum and visited the first team dressing room, as well as appearing on the famous pitch.

His visit to Barcelona started on Friday with a trip to the Ciutat Esportiva, where he was able to meet some of the players and chat to the likes of Xavi, Piqué and Messi, who also presented him with a signed shirt. The Japanese singer also spoke for a while with coach Josep Guardiola, for whom he senses deep admiration. “His way of thinking, his heart and everything else make him great. In Japan, all Barēa fans think the same way about Guardiola” he said.

Yu Shirota also admitted that he has been seduced by Barcelona’s football style and particularly Andrés Iniesta. On the FCB midfielder, he said “he moves the ball as if it was part of his body, another limb, he’s amazing”. Yu also said that Barēa seem to be getting more and more popular every day in Japan.