Agreement with the National Anti-Doping Agency

Agreement with the National Anti-Doping Agency for clean sport

The FC Barcelona president, Sandro Rosell and the director of the National Anti-Doping Agency (AEA), Francisco Javier Martin del Burgo Simarro, signed, this Wednesday at the Camp Nou, a collaboration agreement to promote the values of clean sport.

This agreement is the result of the efforts of both institutions to promote these values. In the case of FC Barcelona, Dr. Jordi Monés, director in charge of medical services, has led this project from the beginning of the mandate of the new Board. 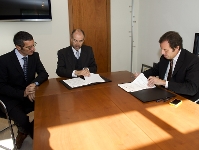 The agreement provides the organization and joint implementation of seminars, conferences, publications, and presentations to promote the values inherent in sport, as well as inclusion in courses and masters organized or promoted by FC Barcelona on areas of knowledge about anti-doping legislation and on the harmful effects to the health of athletes involved in the use of banned substances.

Amongst the measures envisaged in the agreement are included the development of promotional campaigns for sports training in the values of fair play, which will include the participation of Barça players and coaches.
Also, and being aware of the importance of technical training for players, the agreement aims to focus on the task of transmitting the values of personal growth, team play, clean and healthy sport and respect for opponents, that the Barça technical staff are implementing throughout the different categories within the Club.

On the other hand, for the director of the AEA, Francisco Javier Martin del Burgo Simarro, the signing of such agreements "gives a huge boost to the work of prevention and awareness in the fight against doping amongst young athletes". Martin del Burgo, who thanked FC Barcelona for their "commitment and collaboration in promoting clean sport", stressed the importance of working on "teaching of values" of players and coaches. "The key is to prevent and educate for correction" he added.

In addition, the agreement signed this Wednesday anticipates the possibility that the National Anti-Doping Agency and FC Barcelona may promote the granting of Sports Conduct Awards, to distinguish each athlete, coach, director, etc., for their behavior and respect for exemplary sport and fair play on and off the field.