The Fundació FC Barcelona and the Bill & Melinda Gates Foundation have released a video to increase awareness of the disease to coincide with World Polio Day.

Monday October 24th is World Polio Day and the Fundació FC Barcelona and the Bill & Melinda Gates Foundation would like once again to make public their support for the campaign to eradicate this illness, something they stated when they signed their strategic alliance last July.

“More than a goal. End Polio” 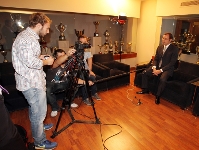 FC Barcelona have placed their powerful media profile and global reach at the service of the Bill & Melinda Gates Foundation to help the development of programmes aimed at ending the disease under the slogan: ‘More than a goal. End Polio’. As part of that commitment, the first team players all wore shirts bearing the words “End Polio” before last Saturday’s game at the Camp Nou, with the number 99 on the back, referring to the 99% eradication rate of Polio.

In the video aimed at increasing awareness of the disease, Bill Gates, who can be seen wearing a Barça shirt, explains that: “no other sporting institution in the world shows the same passion for resolving social problems”, and goes on to say that he is “proud “ of the alliance signed between his Foundation and the Club. In the same vein, President Sandro Rosell states that Barça have “chosen the best team to beat this illness - the Bill and Melinda Gates Foundation”. Josep Guardiola also features in the video clip, produced by Barça TV and restates the first team squad’s “commitment “ to the cause. There is also a call to join up with the campaign via its official Facebook page . 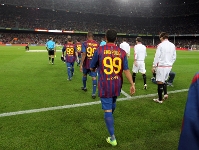 Polio is an infectious disease which attacks the body’s nervous system and can result in irreversible paralysis. It is spread in places with poor hygienic conditions and principally affects young people and children. There is no cure for Polio, but an effective vaccination does exist, which is administered in various doses during childhood.

Global campaigns against Polio have reduced the cases of the disease by 99%. In 1988 the disease killed or paralysed nearly 350,000 people throughout the world, whilst in 2010 less than 1,500 cases were reported. Even so, the disease persists in Pakistan, Afghanistan, India and Nigeria. Polio could be the second disease to become completely eradicated after smallpox.

According to the Departament de Salut de la Generalitat, no case of Polio has been recorded since 1983.