FC Barcelona have joined up with Conscient Football to set up an FCB Campus in India for 2012. The Director of FCBEscola, Xevi Marcé, believes the country is “important and strategic” for the Club given the growth of interest in the game in India. 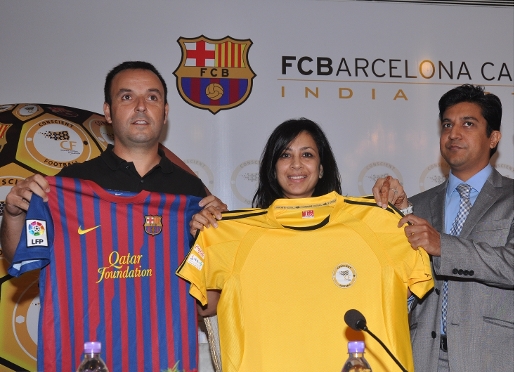 Aspiring youth footballers in India will now have the opportunity to be trained by one of the world’s best youth development programs created by FCBarcelona. The Club have tied up with Conscient Football and will launch their entry into India through their trademark FCBarcelona Soccer Camps, which will serve as a platform for the youngsters taking part who will be working towards more serious training. It is hoped that over the next three years, 10,000 children will take part.

Xavi Marcé explained: “We are excited to partner with Conscient Football to introduce FCBarcelona in the country through FCB Camps. India is an important and strategic country for FC Barcelona, given their growing interest in football”, whilst Conscient Football Director Anu Jain believes: “The main objective is the development of youth footballers on a wide spread and sustainable basis guided by the best in the world. We plan to build a solid foundation upon which Indian talent can be nurtured and grown to become champions in football and in their own lives.”

Last year the Club’s campuses were held in 22 countries across the world and helped 18,000 youngsters aged between 6 and 14 years old. The training offers participants the chance to experience the Barça style under the expert guidance of a group of coaches coordinated by the FCB Escola. For the Indian campus, a technical team from FCB Escola will travel to supervise the preparation and execution of all the training camps across the country.