The inauguration of the Masia was seen in 150 countries via the different FC Barcelona channels and was seen by 300,000 people, a record breaker for a Catalan language broadcast.

“The new Masia for a new Messi”

The inauguration of the new Masia has made history for its impact on the global media, who didn’t tire of expressing their admiration for a club that has already produced so much amazing talent. Reuters described the huge number of household names that were groomed at La Masia “starting with the coach himself”. ESPN highlighted that “while the European elite is still wondering how to stop the Barça machine, the Catalans already have a plan in place to ensure they stay at the forefront for the forthcoming years”. L’Equipe and Le Figaro also wrote about the ceremony in their digital versions, as did the specialised sports service Sportune.fr, which said that the new Masia is out “to find the new Messi”. From Sweden to Brazil, and in Russia, the United States and the United Kingdom, the new Masia is considered an essential element of the Barça of the future.
Barça fans had a thrilling day on Thursday as the new Masia –Oriol Tort Training Centre was opened. The ceremony was shown on the Club website, its Youtube channel and Barça TV. Almost 300,000 people in some 150 countries watched the trilingual broadcast. For the first time ever, a Catalan language show was broadcast around the world, and that alone as seen by some 50,000 people. Youtube was the preferred channel for following the events.

Barça sentiment around the world

130,338 users connected to the club website and the FCB Youtube channel was seen by some 93,038 people, where the show was broadcast in English, Spanish and Catalan. 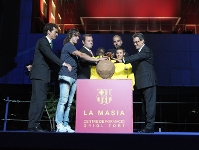 Televisions channels TV3, Esport 3, Teledeporte and in 60 other countries also used the signal created by the Omnisport news agency, including ESPN, Al Jazeera and Fox Soccer.

There was also a huge impact on social networks, with 122 tweets per minute on Twitter, which makes for two actions per second discussing the opening of the new facility in Sant Joan Despí via #masiaFCB.

The video of the complete event can still be viewed online.