Rosell: “La Masia is a school for values”

Rosell: “La Masia is a school for values”

At the official inauguration of the new youth residential centre, Sandro Rosell praised the sporting and human work done within the Masia. The president hoped that the atmosphere of the old building at the Camp Nou would be transferred to the new one

The institutional and sporting guests were shown all around the new Masia, Oriol Tort Training Centre. Led by the director of la Masia, Carles Folguera, and the presidents of the Generalitat Artur Mas and of FC Barcelona Sandro Rosell they got to see where the future Barça stars will be living.
Shortly before a quarter to nine, the president of the Generalitat de Catalunya, Artur Mas, the president of FC Barcelona Sandro Rosell, coach Pep Guardiola, captain Carles Puyol, and the two youngest residents, Alejandro Viedman and ‘Bobby’ Alekanyue, symbolically pressed a ball to open the Oriol Tort Training Centre, the new Masia.

This was just the start of a well attended and emotional event in which the new technology 350,500 LED lights in the façade projected images that linked the experience and recognition of the protagonists.

Transferring the atmosphere of the old Masia

President Sandro Rosell expressed his satisfaction at the finalisation of a long project, saying that the building is “modern and functional … I have no doubt that the we shall bring the warmth of the traditional Catalan Masia here”.

More than a training centre 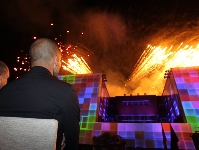 Sandro Rosell thanked everybody that has played a part in making the Masia part of what Barcelona symbolises, and had a special mention for the parents of the footballers that “entrust us with their children.” But he added that “here we have the finest farmers, led by Carles Folguera”. Rosell also said that “La Masia is much more than a residence for young sportspeople. It a school that teaches values”.

The president of the Generalitat de Catalunya also had a few words for the people that attended the event. “Barça has shown that a project like Masia carries the essence and roots of the long history of the club, a city and a country, that is also the best in the world. Now we can say that we are great ambassadors”, said Artur Mas.

Iniesta, the voice of experience

Andrés Iniesta, one of the first team players that once lived at the old Masia, spoke about what it was like to live there. “I know that my family educated me and I was trained here. There is no better place to learn than at la Masia”.
Guillermo Amor, director of youth football, and who is also a former resident of la Masia was also involved in the ceremony, as was a choir from the Orfeó Catalŕ, who sung the Barça anthem, actor Lluis Soler and musician Lautaro Roses, who performed ‘Viatge a Itaca’.