Alba Villar is the winner of the competition organised by Barça Fans using QR bar codes and has won a shirt signed by all the members of the first team. 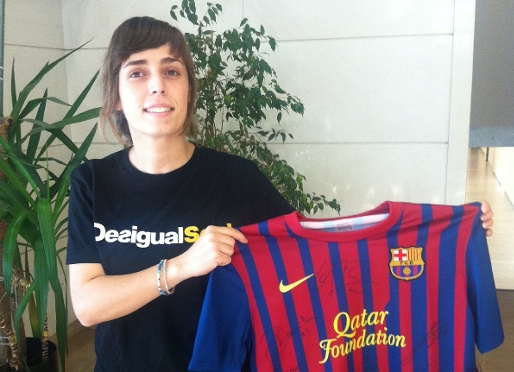 Alba Villa is the winner. Photo: FCB
The first team shirt signed by all the players went to Alba Villar, who won the Barça Fans competition which was organised this summer using QR codes at the Club’s facilities.

Villar is a Barça Fan and a supporter of the first team- especially of Andrés Iniesta and heard about the competition via the Club website. She was one of the thousands of people who signed up at www.fcbfans.com via her mobile, thanks to QR technology. QR – Quick Response – is a matrix barcode technology which allows users with a smartphone equipped with a camera and QR barcode reader to connect automatically to the Barça Fans website.

More than half a million Barca Fans

Barça Fans is the official FC Barcelona supporters community and as of August 1st had more than 600.000 members from all over the world, who enjoy special offers from the Club. Together with the 20 million fans on Facebook and 3 million on the three Twitter accounts - @fcbarcelona_cat, @fcbarcelona_es and @fcbarcelona, this has helped make the Barça feeling go global. Barça Fans has grown enormously, not just in Spain, but also in countries such as USA, Colombia, Venezuela, Mexico, India, Poland or Morocco.