Go ahead for new supporters terrace

Go ahead for new supporters terrace

The members have expressed their agreement with proposals for a ‘Grada d’animació’. The vice president of the Social Area, Jordi Cardoner, said “it will not happen is it doesn’t not satisfy all safety requirements.”

Voting on the ‘Grada d’animació’ project

Jordi Cardoner explained the third of the major proposals being put by the Board to the General Assembly, the desire to create a zone in the stadium for particularly passionate supporters who can set a “world standard” and “transmit the Barça values around the world”.

The section will accommodate 1,400 members that reflect “Barça support, Catalanism and civil duty. We want the very best support for our team. Not accepting this project would be like giving in to violence. We have the best fans in the world and we should have the best terrace in the world” he said. 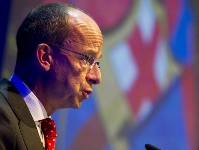 Cardoner added that “we will work to make sure this is a safe project, and for it to represent the genuine expressiveness of our supporters. Violence has nothing to do with the project. We want a 100% safe place. We reiterate our zero tolerance to violence, our club is committed to the safety that we have to offer our members.”

Cardoner also said, before the vote, that whether or not the project is accepted, it will not go ahead “if it does not meet the maximum security requirements and we have our full faith in the Catalan police should they not authorise it. Therefore there are no dates for the implementation of the project. We will have to wait until these two issues have been cleared up.”

He ended his speech by saying that “this is pending project for Barça fans … it was designed to make the support in our stadium more heard. Sometimes we are lacking in volume at difficult times. Perhaps it’s because we Catalans sometimes find it hard to express ourselves collectively. Our stadium needs the kind of support that our team deserves. Many other teams have much noisier supporters than we do, and our team deserves more” he said.