94% of the members at the assembly have voted in favour of the budget presented by Antoni Rossich, director general of the Club, which foresees profits of 20.1 million. “It is a prudent and realistic budget” he said.

At last year’s General Assembly, the director general of the Club, Antoni Rossich, explained that the losses expected in the 2010/11 season, which turned out to be 9.3 million euros, were “essential in order to make profits a year later.” 12 months have passed since then, and the members are united in their support, with 94% in favour of the budget presented for the 2011/12 season, which see profits of 20.1 million. Rossich called it “realistic, it was produced responsibly and following highly prudent criteria”.

Antoni Rossich explained that this budget had been designed on the assumption that the first team will win La Liga, get to at least the semi finals of the Cup, the quarter finals of the Champions League and the Clubs World Cup Final.

The profit of 20.1 is directly related to the reduction in expenses with respect to 2010/11. In total, the decrease is 42.4 million euros, 9%. These lower expenses are the result of the fall in losses for transfers, for which the figures were high last season owing to the transfers of Ibrahimovic and Chygrinski.

Adell: “A successful change of course” 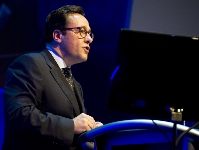 The president of the Economic Commission, Ramon Adell, ended the third item on the agenda with a speech, which like Rossich’s, was prudent and optimistic: “We can’t fall into the temptation of thinking about how we can spend these profits. By making money each year we can increase our assets, which is an imperative need … We have successfully changed the course of this ship, but the crossing will be a long one and we need to make up for previous setbacks”.