Sandro Rosell has spoken about what he describes as a historic season, in which 16 titles were won. He also commented on financial, social and institutional matters.

The president of FC Barcelona opened the Ordinary General Assembly by reminding members that the Board is pursuing not just sporting excellence, but excellence in all aspects of the club. Using videos and a multimedia presentation, he looked back at the events that have most affected the club over the year.

Satisfied with success and values 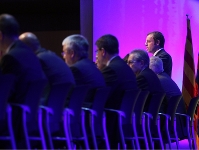 Sandro Rosell is convinced that this is the best ever moment in FC Barcelona history, but is also delighted by the way, win or lose, the team promotes such positive values, which has won the club respect all round the world. He also paused for a moment to formally recognise everything that has been achieved by Pep Guardiola and his team, which was followed by rapturous applause.

He also spoke about two players that have had a dramatic effect on the club’s finances. He said that the sale of Chyigrinski was more for financial than sporting reasons, for the club urgently needed funds to pay its players. As for Ibrahimovic, he explained that his transfer to AC Milan means that the members of the Board will have to guarantee the accounts for another two years.

The challenge of further growth

On the club’s finances, he said it is important “for our spending not to surpass our economic limitations”. He also spoke about the desire to gradually reduce the net debt, which is currently 364 million euros and which this season he hopes to get down to 338 million. Rosell was pleased with the increase in income, but reckons there is still a need for further growth. We need to “grow or die” he said, saying that his club was at a disadvantage compared to other big European clubs than can increase their share capital or receive huge income from single owners. “If we don’t grow we won’t progress” he concluded. 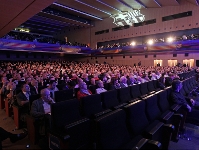 In Rosells’ opinion, Barça also needs to increase its assets. Here he spoke about the completion of the work on La Masia, but also the requalification of the Miniestadi site, which is “fundamental for our expansion in Les Corts”, comparing the situation to his club’s opposition to the ‘long ball’ culture. He also explained that the club has obtained a new site next to the Ciutat Esportiva pavilion, which will be used for more sports facilities.

After praising the club for the transparency of the season ticket renewal process and the actions to stabilise the number of members, Sandro Rosell said that “we have taken politics out of the club. We are Catalans and pro-Catalonia, but we are not one colour or another, nor on the left or right. We are Barça members and we don’t like it when politics wants to take over our club”.

Before ending his speech, he encouraged the members to vote in favour of the agreement with Qatar Sports Investment, the campaign for a smoking ban in the Camp Nou and the creation of a zone for younger supporters. “It will be an exercise in plurality and debate. Before you vote, think about Barça”, he requested.