Faus: "We’ve reduced the debt, but the situation is delicate"

The Vice President of Finance explained that the Club's finances have improved, with record revenues in the 2010/11 season, and a debt reduction of 15.5%, but warned that the situation remains "delicate".

Proposal to change the Statutes

To ensure the Club’s economic prosperity in the coming years, Javier Faus explained that the Board is preparing a Special Assembly, with the intention of reformulating some points within the Statutes of the Club. Firstly, to set a limit on the Club’s debt, which at present is too high, according to Faus. Another aim is to prohibit, by statute, the closing of a season with losses. "It’s an obligation that is already imposed on us by UEFA. We want to shield the Club, in case someone might think, in the future, that a season can be closed with losses" Faus said.

The Vice President forewarned, at the same time, that there will be a proposal that the new Statutes include mandatory reserve assets each year. "We believe that the assets of the Club are the future of Barça. Thus, each year it should be compulsory to invest in equity" added the Vice President.
The economic situation has improved at the Club, but even more must be done. This idea is what the Vice President of Finance, Javier Faus, sought to convey on Wednesday at a press conference which served to analyse the Club’s finances at the end of the 2010/11 season, and to present the 2011/12 budget. "We followed an austere line, we’re committed to growth and we’ve reduced the debt, but we’re still in a delicate situation. The debt is still too high for us to be able to dictate our future. We can’t afford to owe so much money to the bank, and we need to generate more income" he said. For Faus, a net debt of approximately "just over 200 million” would be the ideal situation, rather than the current 364 million.

However, the path being followed is the correct one. In one season, the debt has been reduced by 15.5% (from 430 to 364 million). "It’s not the debt that we want, and we have to reduce it further, to sustainable levels, with regard to the cash flow generated by the Club. We’ll continue to work on it " repeated Faus, who wanted to emphasise the importance of not relying so much on the banks.

Less losses than the budgeted loss

As he advanced some time ago, Faus explained that the 2010/11 season closed with a loss of 9.3 million Euros, a figure much lower than the budgeted 24.1 million, a year ago. He also presented the highest income "in the history of Spanish football" according to Faus: 473 million Euros, 58 more than in the 2009/10 season (14% more). "It’s a motive for satisfaction" he said. 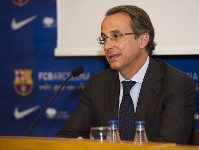 Looking to the 2011/12 season, the Club has budgeted for a profit of 20.1 million Euros, revenues of 461.1 million, and costs of 430.2 million. These previsions include lifting the League title, and reaching the quarterfinals of the Champions League. If Barça get further in Europe, these numbers will vary. In any case, Faus explained that if, in the 2010/11 season, they had won the League and reached the quarterfinals of the Champions League, the increase during 2011/12 would be 7%.

Cost Reduction, one of the objectives

In this sense, Faus said that income in the marketing area is increasing, due to the agreement with Qatar Sports Investment, and expenditure "isn’t dropping because the wages without winning titles have gone up". That is, Alexis and Cesc earn more than the players who’ve left the club. The vice president indicated, however, that the Club "will continue trying to reduce overall spending", focusing particularly on wages of the various sections, which have increased by 20% in four years (and those of football only 6%).