Barēa and the 5 Super Cups

Barēa and the 5 Super Cups

For the first time in Club history, five professional teams compete for the Spanish Super Cup in one season. With football already in the bag, this weekend will be the turn of indoor football and handball.

The fruits of the historic 2010/11 season are still being collected The 16 titles from the previous season mean Barēa are playing in the Spanish Super Cup at football, indoor football, handball, basketball and roller hockey. Until now Barēa had never been in a position to battle for this title in five different sports in one season.

Football in the bag 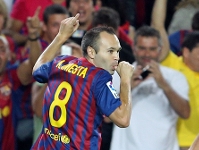 The football team, as League Champions, played the Spanish Super Cup in mid August against Real Madrid, Spanish Cup winners. Guardiola's side imposed themselves, after a 2-2 draw in the Bernabeu, and won 3-2 at the Camp Nou. Thanks to this victory, Barēa are top of the teams who have won this competition, with ten titles.

Now for indoor football and handball

This weekend, two sections have the opportunity to follow in the footsteps of the football first team. First, Barēa Alusport, League and Cup Champions, make their debut in a Super Cup, in Torrejón de Ardoz (Madrid). On Saturday at 18.00 they’ll play against El Pozo, from Murcia, in the semifinals. A win will give them a place in the final on Sunday.

Meanwhile, Barca Intersport, current League Champions, will face Athletico Madrid on Sunday at 20.15. The Handball Super Cup will be held in Vista Alegre (Madrid), over just one game.

Basketball and roller hockey, coming up

Later on it will be the turn of the basketball and roller hockey teams. The Super Cup will kick off the season in the ACB. Barēa Regal, League and Cup Champions, still don’t know who they’ll play in the semifinals, on 30th of September. The other candidates are Bilbao Vizcaya Basketball (hosts), Madrid, and Caja Laboral. Xavi Pascual’s team have won the last two editions of the tournament.

Finally, Barēa Sorli Discau, Cup Champions, will play the Super Cup in December against Tecnol Reus. The first leg will be at the Palau on the 13th of that month and the return leg ten days later, in Reus.