The ‘Barça Party’ gets underway

The ‘Barça Party’ gets underway

More info
Adults and children are welcome. The Barça Party is now a reality and the forecourt of the Camp Nou is already awash with members, and supporters’ club members, who have come to take part in the planned activities.

There are activities for the younger kids, like table football or 7-a-side football, as well as for older children who can participate in the various workshops organized by the Club, as well as playing the more traditional table games. All participants will receive some sort of present, like Barça scarves for example. 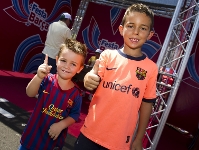 One of the areas that the fans have focused on most is the one where the 16 cups won last season are displayed. Adults and kids are having their photographs taken with the trophies won in the 2010/11 season. In addition, the Club has also included the Spanish Super Cup, won last week against Real Madrid.

The other activity that has attracted most public has been the book of wishes, which Barça has made available so that attendees can write in it with their hopes for the current season. One of the most popular messages has been: "See you in Munich" referring to the city where the next Champions League Final will be played. The other major attraction has been the hot-air balloon, which allows fans to get a great view of the Camp Nou from the air.

Water to combat the heat

Due to such high temperatures being recorded in Barcelona today, the Club has provided each attendee with a ticket to be able to cool off and stay hydrated in the current heat wave. In addition, there are refreshments for members and supporters clubs.

This evening several Barcelona Directors will be present. At the head of these will be the Club's Vice President and head of the Social Area, Jordi Cardoner i Casaus, who will also attend the dinner that will kick off the XXXIV World Meeting of Supporters Clubs and the 32nd Supporters Club Congress.