Iniesta, Busquets, Pedro and Tito Vilanova are the faces of a new Nike audiovisual campaign that explains the details of the Barça philosophy and style. The commercials were recorded early in the US tour, in Washington. 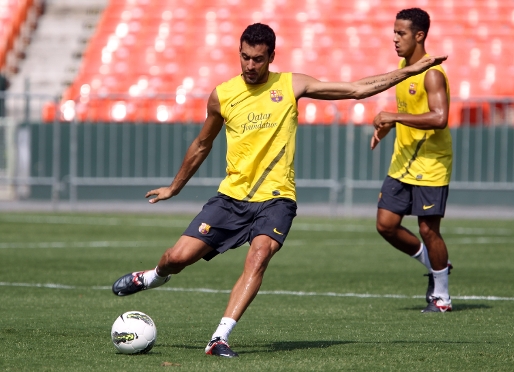 The Nike ‘Inside Edge campaign shows some of the biggest teams in the world getting ready for the new season. FC Barcelona naturally feature prominently. Exercises, matches and advice from the players and coaches help reveal how the Liga and Champions League winners get ready for action.

The campaign is made up of three videos recorded in collaboration with Sergio Busquets, Andrés Iniesta, Pedro Rodríguez and Tito Vilanova. ‘Control the game’ explains details of Barça’s world famous style and philosophy. ‘Match Fit’ shows how Barça prepare for preseason matches. And ‘The Finisher’, focusing on striker Pedro, takes as special look at what the Barça forwards to do hone their skills in training.