FC Barcelona and UNICEF reaffirm their alliance in Dallas

FC Barcelona and UNICEF reaffirm their alliance in Dallas

The Club, through its Foundation, and UNICEF held an event in Dallas on Friday where David Villa and Thiago answered questions from an audience of youngsters, with the aim of strengthening the links between the two organisations. 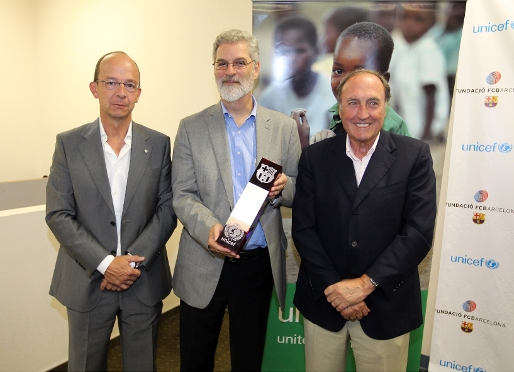 More info
The event was held at the Dallas Lakewest YMCA. It was attended by Villa and Thaigo Alcántara, who answered questions about their experiences as footballers and when they first decided to take up the game. The event was attended by the Club Vice-President Jordi Cardoner, Club Director, Ramon Pont and the assistant director of operations and finance at UNICEF Lawrence Picard.

UNICEF and FC Barcelona announced in May that they were widening their work together when their current agreement ran out in June 2011. The UNICEF logo will continue to appear on the first team shirt for the 2011-12 season, appearing just below the player name on the back of the shirt.

Over the last 5 years FC Barcelona have given their support to UNICEF and its commitment to improve the lives of millions of under privileged children, helping to give global publicity to the UN agency.

The next phase of the collaboration aims to take advantage of the social impact the Club has in order to give support to a worldwide campaign for education and sport.

During the event, the Vice President of the Fundació, Ramon Pont explained that the Club intended to continue working with UNICEF: “because we are friends and share values. There is a lot of understanding between us and through sport we can help to build a better world”.