Barēa is the model to copy. The more than 1,200 children of thirteen nationalities that have participated in FC Barcelona campuses organised in Miami know that well. 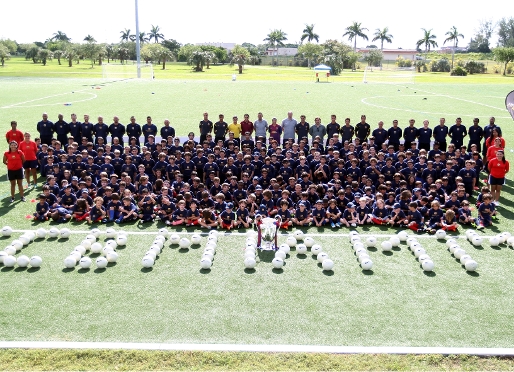 Just a few kilometres from Cobb Stadium, where Pep Guardiola was coaching his squad, a group of 250 children aged 6 to 14 years played football at Kendall Soccer Park, where the sport is approached in the same way. 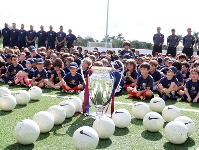 They are the participants in one of the FC Barcelona Soccer Camps in Miami, which for the fourth year in a row is training American children in the Masia methods. “These children want to learn the training methods that worked so well for their heroes, like Xavi, Iniesta, Busquets, Piqué...”, says Oriol Sala, the organiser of the event in Miami. In these four years, between 2,500 and 3,000 children have benefited from the camps, as Barēa makes its mark on this region of northern Florida.

Edgar Enrich is the sports coordinator and oversees the technical direction, which also follows the FC Barcelona system, with a group of Catalans working with local collaborators, to ensure a top quality program is on offer.

Bartomeu: “It is a thrill to work with children”

As Barēa are in Miami at the moment, so the children were able to enjoy a visit today from vice president Bartomeu, director of professional football, Andoni Zubizarreta, and ex footballer Mia Hamm. Bartomeu said he was “mightily impressed” to be able to see the way the children were coached according to “our philosophy. It is a thrill to work with children. We create sportspeople and also cultivate the Barēa sentiment. I’m sure it’s an unforgettable feeling for these children. They’ll never forget it” he said.

Mia Hamm, FC Barcelona’s ambassador in the USA, also spoke to the children. “Respect play and respect others. No player is more important than any other. And don’t forget that the most important thing is to enjoy playing soccer.” One of the most magic moments of the day for the children was the chance to see Barēa’s latest major conquest, the Champions League trophy.