ďThe recipe of football and education is infallible"

The FC Barcelona Foundation and the Fundaciůn Pies Descalzos will work together to foster education for vulnerable children. Shakira, its founder, has explained that football can be used to build a future for these young people.

‘The value of having values’. That slogan that was revealed when BarÁa won la Liga and the Champions League has become stronger on this US tour. Because aside from the games being played by the first team, FC Barcelona has also found time for the most vulnerable sectors of society and has been involved in several important agreements this week.

On Thursday they were in Washington signing an agreement with the Bill & Melinda Gates Foundation, and on Monday in Miami the FC Barcelona Foundation was at the University of Miami to unveil its collaboration agreement with the Fundaciůn Pies Descalzos set up by the Colombian singer Shakira. 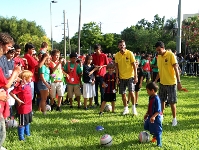 A number of boys and girls and plenty of people from the media, including about 30 TV channels, were there to watch the event featuring Shakira with BarÁa players Piquť, Puyol and Busquets, and the vice president of the FC Barcelona Foundation, Ramon Pont, and former footballer and BarÁa ambassador for the USA, Mia Hamm. Also attending were vice presidents Josep Maria Bartomeu and Jordi Cardoner, plus directors Josep Ramon Vidal-Abarca, DŪdac Lee and Ramon Cierco.

The aim was to talk about the importance of sport, and football in particular for the education of young people. As Shakira said “education is important. And education with football is even better for promoting integration”.

Shakira admitted that thanks to Piquť “I have learned what sport means. Respect for the rules, discipline, reaching targets, building dreams and making them come true.” She also said that at BarÁa “there are different nationalities, beliefs, idiosyncrasies … but what matters is the unity of wearing the same shirt. And I dream that humanity can wear the same shirt, which is that of giving children a chance”. Given all the values that BarÁa represents, Shakira has found that football is a means to educating future generations. “The recipe of football and education is infallible. Every child should have a book and a ball” she said.

Involvement with famous people from around the world is one of the ways for FC Barcelona’s agreements to produce results. That is what the vice president of the FC Barcelona Foundation, Ramon Pont, said, explaining that “collaborating with Shakira is an extraordinary opportunity”. Pont also said that BarÁa “is more than a club because it has a heart, energy and sentiments”.