Presentation of the Fundaciˇ Pies Descalzos

Presentation of the agreement with the Fundaciˇ Pies Descalzos

The Fundaciˇ FC Barcelona and the Fundaciˇn Pies Descalzos presented their joint project ôFootball for the development of youth and healthy livingö in Miami on Monday night. 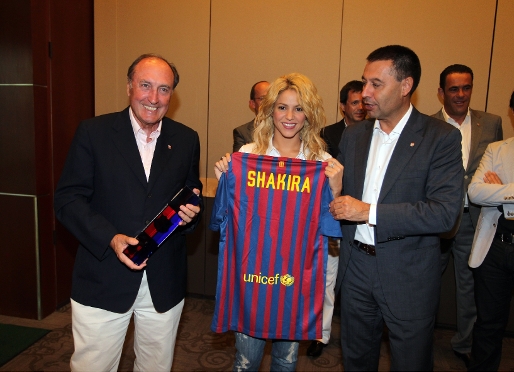 More info
The project was launched in the presence of Shakira and Barša players PiquÚ, Puyol, Busquets and Affellay at the Newman Alumni Center of the University of Miami.

Projects in Colombia and USA

The cooperation agreement between the two foundations was signed on February 17th this year and includes the building of sporting and recreational spaces in Cartagena, Colombia and in Miami. The aim is to benefit the most vulnerable children in Colombia and the Hispanic community in the States, who run a high risk of social exclusion.

The project is targeting the 28.441 youngsters who live around the North Point , 4,409 of whom are children living below the poverty line and are made up of 46% of Cuban origin 22% from Colombia, 12% of Nicaraguan origin, 8% from Venezuela and 12% from other countries.

The project will be developed with the Greater Miami YMCA at the North Point Centre in Dade County, where there are precious few few educational resources of this type and where the YMCA opened its centre two months ago.

The project will provide resources to convert the centre into a sports hall to implement the project of education and development through football. The project will be implemented in coordination with the US Soccer Foundation and the Greater Miami YMCA. The fundamental values which will be worked on are fair play, team work, winning with humility and losing with dignity and respect for the rules of the game.