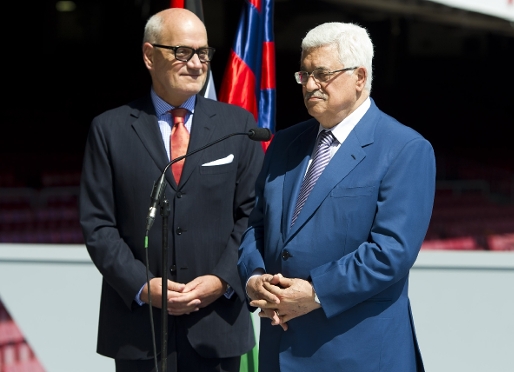 More info
As part of his tour of Europe to visit a number of institutions, the President of the Palestinian National Authority Mahmud Abbas visited the Camp Nou this morning. Mr Abbas was met at gate 15 of the Stadium at 11.30 this morning by the Club’s Institutional Area Vice-President Carles Vilarrubí and the two then moved inside the Camp Nou where the President gave a short speech.

Abbas explained he was “full of honour and happiness for the hospitality Barça have shown to me. This is a Club with a wide recognition. FC Barcelona represents a civilisation and a people with good values and that can always be seen. I would love them to visit Palestine one day to play a game”.

Vilarrubí: “Barça is a window onto the Catalan society”

Replying, Sr Vilarrubí responded to the President’s visit by declaring: “it has been an honour. FC Barcelona represents a window through which people can see the Catalan feeling – the way a whole people feels. This is a special moment for the Club as we are enjoying such great success. Barça share the values of peace, living together, sport and civil society with the Palestinian people ”

Visit to the Club Museum

Abbas and Vilarrubí exchanged various gifts, including two shirts for the President’s grandchildren who accompanied him on the visit. Mr Abbas then signed the Club’s book of honour and then visited the Museum with Sr Vilarrubí to see the 16 titles won by the Club’s various teams last season.