As announced by the president of the chamber, Núria de Gispert, Josep Guardiola will receive Parliament’s Gold Medal on September 8 as part of the Catalonia National Day celebrations. 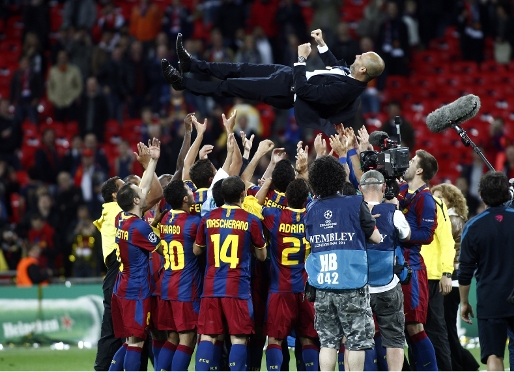 Núria de Gispert made this statement on Tuesday at midday, saying that the nomination Josep Guardiola enjoyed the full support of the Parliamentary Table.

The award will go to the Barcelona manager “because of his career as an elite sportsman, for the success he has achieved as manager and for the way he was projected Catalonia as being cultured, civic and open, and doing so in such a notorious way”. Parliament also highlighted “the values he transmits in such an exemplary way, with such sportsmanship, teamwork, effort and personal achievements, very valuable values not just for an individual but for collective progress”.

This award has been given out since the year 2000 and is given to people felt to deserve special recognition. Josep Guardiola’s name is thus added to a list that includes the Reverend Desmond Tutu, the Jesuit Miquel Batllori, economist Ernest Lluch, UN representative for Afghanistan Francesc Vendrell, musician Jordi Savall, the president of the Down’s Syndrome Foundation, Montserrat Trueta, Nobel prize winner Adolfo Pérez Esquivel, the Setze Jutges group and illustrator Roser Capdevila.