There has been a 400% increase in attendance of official Barēa summer schools (FCB Camp) with respect to last year. More than 18,000 children are enjoying the summer camps organised by FC Barcelona. 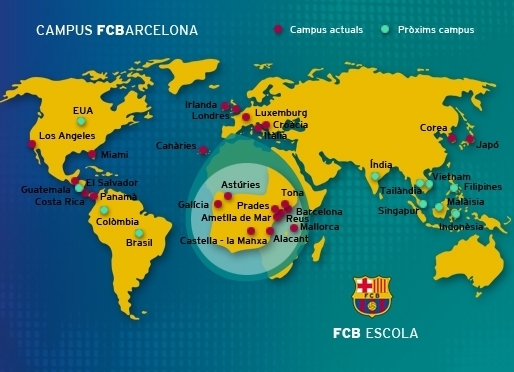 The Barēa model is expanding around the world, and the FCB Camps are the finest example of this growing interest in learning more about the Barēa model through hands-on experience.

Objectives of the campuses 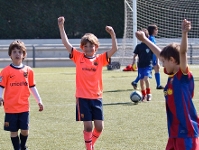 The official FC Barcelona campuses offer the opportunity to learn about football skills and tactics in accordance with the same methods that are used with the Barēa youth teams.

Children registering for the FCB Camps take part in parallel training, leisure and recreation activities related with football and Barēa.

The camps encourage coexistence between school age boys and girls from different origins, cultures and concerns, but who all share the same passion for football and Barēa.

The coaches do not only work on football issues, but also ensure the children get proper hygiene and diet. One of the aims of these campuses is to transmit the same values that FC Barcelona represents.

In the coming months, there will also be FCB Camps in Colombia, El Salvador, India, Vietnam, Thailand, Singapore, Philippines, Indonesia, Malaysia and other cities of the USA.

All campuses that have this logo on their websites are official FC Barcelona campuses. These campuses are always redirected to an official address: www.fcbcamp.cat the name of the campus

The logo and official image of the campus is also a means of checking that the FCB Camp is official and valid. There is also an email address that you can use if you have any doubts or queries in relation to the official FC Barcelona campuses: fcbescola.international@fcbarcelona.cat

The choice of venues of FC Barcelona official campuses is based on strategic criteria.

The director general of FCB Escola, Xevi Marcé, understands that “we’d like to get everywhere, but that’s impossible. Barēa looks for strategic locations based on the relevance of the places, the synergies with sponsors and also to promote the brand”.

Marcé highlights what is so unique about Barēa’s camps: “we don’t sell the brand, we control the sporting aspects and the values. From the moment the children arrive to the moment they leave, we are not only interested in what they learn technically, but also the way they behave, their habits, the way they deal with colleagues and monitors…

Marcé feels FCB Camps are “the extension of the values and football coaching used at La Masia, we export them to the rest of the world by meticulously controlling things from Barcelona, where FCB Escola has its headquarters”.

Marcé and Jordi Rovira were the main men behind the creation of FCB Escola in 2003. The School grew out of the Barēa Social Tournament, which produced such players as Gerard Piqué and Vķctor Valdés.

In these eight years, 65 children have progressed from the FCB Escola to the club’s own youth system. 14 coaches have also been promoted during this period, including most recently Jordi Pérez, who after working at the FCB Escola is now the coach of Barēa’s Benjamķ D team.

Given all the above, Marcé is quite right to describe the FCB Escola as a ‘youth coaching factory’.