On Thursday, FC Barcelona president Sandro Rosell welcomed the Chinese ambassador to Spain, Eugeni Bregolat, on an institutional visit to the club. 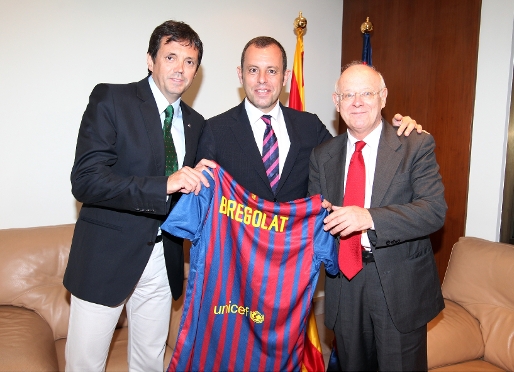 Ambassador Eugeni Bregolat was on the FC Barcelona grounds on a courtesy visit, in which meetings were held with some of the senior executives of the club, which is keen to organise such encounters with representatives of different countries. President Rosell presented the ambassador with a first team shirt at an event that was also attended by director Ramon Cierco.

Rosell and Bregolat spoke at length about relations between FCB and the Asian country and their shared interests. China is one of the markets that FC Barcelona is most looking to expand into and has a huge number of fans in the territory. The ambassador’s collaboration is an important element of the plan to encourage joint actions between Barça and the People’s Republic of China. The ambassador said that “these are two institutions, one a country and the other a sports club, of the highest degree and that are currently at their respective peaks”.