"The agreement with Qatar gives us breathing space”

"The agreement with Qatar gives us breathing space”

Sandro Rosell has stated that the agreement between FC Barcelona and the Qatar Foundation will allow the club to reduce the economic losses from 22€ million to 15€ million.

The Blaugrana president attended a press conference on Wednesday to make an overall appraisal of the new board's first six months in charge at Camp Nou. On the institutional front, one of the main areas that Rosell was keen to highlight was the deal that was done recently with the Qatar Foundation.

"I am very proud," he explained. "It has given the club oxygen. Sealing this agreement has allowed us many things, among them is to not increase membership fees, not to bring in more advertising and to be able to continue to be a sports club." The Barça supremo also said that the predicted economic losses for the 2010/11 season would not be reduced from 22€ million to 15€ million. 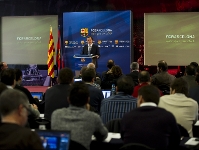 If supporters want to discuss the value of the agreement then Rosell welcomed any members bringing it up at the club's next assembly. "If the members want then they can include it in the order of business to be discussed," he added. "If a group want to put it in the order of the day and the assembly are behind it then it would show that this club truly does belong to the fans."

Another theme that Rosell gave special importance to was the assets of the club. On this point the president explained that he was keen to increase the worthwhile assets, like the land around the sports complex in Sant Joan Despí. "We are making a plan to recover the good assets and, at the same time, help sort out the bad. The lands in Viladecans are a problem." 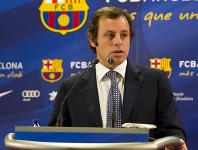 On the theme of the Miniestadi and a scheme to requalify it Rosell was adamant that things had changed. "That has stopped because want to keep this asset as part of the club," he said." On the restructuring of Camp Nou as part of the Espai Barça plan, Rosell explained: "The priority is to have a new Palaui Blaugrana. That is urgent because we will not be able to play in the Euroleague."

Rosell then reflected on the board's relationship with Johan Cruyff and stated that according to the statutes: "The position of President of Honour does not exist." He added that it could be brought up at the assembly. "Cruyff is a member of honour. Time will ensure that everything is sorted out and that it will be fixed," he commented. 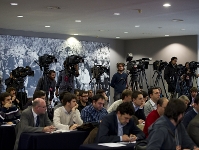 "Maybe the board have not done well enough when it has come to explaining things," Rosell continued when speaking about the things that the new administration could have improved upon. "From now on we will try to do more to improve the manner of communication. We have tried to do many things and when you are doing so much there is not always a lot of time left to speak. But we cannot only forget that at Barça one must do and speak because it is an institution where people want to know what is going on."

On the two electoral promises involving the travel agency and the Grada Jove, Rosell explained that things are underway. "We have not yet completed them because we are working so hard," he added. 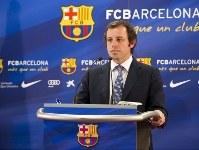 On the matter of leaving his vote blank when it came to the responsibility of the previous board of directors at the last assembly Sandro Rosell said: "I am the president of FC Barcelona and in this sense I should abstain."