In an interview with FIFA.com Sandro Rosell said that having been world champions over the last year has been ďlike paradiseĒ. BarÁaís chairman added that heís anxious to win the trophy again.

Barcelona’s reign as world champions will come to an end this Saturday when their title will be taken by Mazembe Englebert or Milan. To mark the occasion BarÁa chairman Sandro Rosell spoke to FIFA’s website about what it’s like to be world champion and also about having three BarÁa players on the shortlist for the FIFA Ballon D'Or Award 2010.

It is almost a year since BarÁa won the FIFA Club World Cup in Abu Dhabi and Sandro Rosell says that “winning it was extremely important for us as it was the first time that FC Barcelona had won this title.” He went on to add that “when this happens, it's like paradise! I don't want to say it was more important than the Champions League title or Spanish title, but we were very happy to be world champions.” 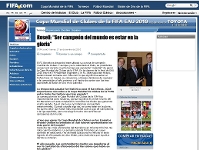 Rosell believes that winning the FIFA Club World Cup in Abu Dhabi may have created new opportunities for the club in the Middle East: “Here in the Middle East, every day we have more and more fans, and we can feel this when we travel. Last week we signed a new contract in this region. I don't know how much last year's success here in Abu Dhabi was a factor, but it definitely helped to raise our profile.”

Being in the next final

Obviously BarÁa wants to get back to the final of the FIFA Club World Cup next year, when it returns to Japan where the final was traditionally held. Barcelona’s chairman said that “for us it is very interesting to play wherever the competitions are hosted. Naturally we enjoy playing at Camp Nou, in front of our supporters, but we want to continue to grow the popularity of our club, and be the club that children around the world admire and look up to.” He went on to say that “I am sure if we were to reach the 2011 FIFA Club World Cup, we would again have a lot of neutral supporters in Japan too.” 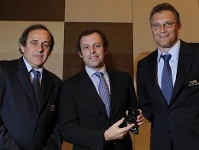 Sandro Rosell also spoke about Leo Messi, Andrťs Iniesta and Xavi HernŠndez, on the shortlist for the FIFA Ballon D'Or Award: “This is as important as winning a big trophy like the FIFA Club World Cup. We are very proud to have all three players from our club shortlisted, and what is more important is that they are ‘home-grown’.“ The BarÁa chairman added that “this gives us the confirmation that the work we started 30 years ago is going in the right way, and we will continue to develop our own players.” Rosell also mentioned Pep Guardiola, nominated for FIFA World Coach of the Year 2010.