Saif Ali Al-Hajari, vice president of the Qatar Foundation, and Ahmad al Sulaiti, executive director of Qatar Sports Investment, have highlighted the importance of the common values between themselves and FC Barcelona in their agreement.

Both wished to outline the importance of the agreement presented on Thursday in Sala París. “It is a big moment. I want to thank FC Barcelona for going ahead with this relation”, said Saif Ali Al-Hajari. The member of the Qatar Foundation was also grateful for the support received from Qatar Sports Investment, the company with which FC Barcelona has signed the agreement and which has transferred its rights to the Qatar Foundation. “It is a historic agreement”, confirmed Ahmad al Sulaiti. 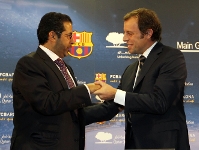 The two Qatari representatives made it clear that they are excited about this collaboration with FC Barcelona and explained why it was that they chose the Catalan club. “We share the same vision and culture as Barça, using sport to help society. We share values and transmit the same message”, said Sulaiti.

From the oil and gas economy to knowledge

Al-Hajari also spoke about what the Qatar Foundation does, an institution that was created in 1945 by the Emir of Qatar: “It is a non-governmental and non-profit making organisation that works for education, science and research and which is open to everybody. We want to build bridges and share knowledge”. 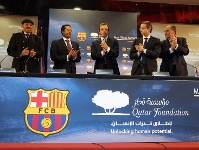 He added that the “Qatar Foundation supports Qatar in its journey from the development of an oil and gas economy to an economy of knowledge, fostering human potential, which will benefit humanity, children, and not only Qatari ones”.

A message to the fans

The Qatar Foundation representative also spoke more directly to the Barça fans and insisted that they “share the same values as FC Barcelona and that the fans will soon understand what kind of company appears on their shirt”. The aim of this organisation is to “exploit sport as a catalyser to bring together people with different histories in a common sport”, said Al-Hajari. 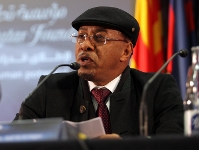 Interest of other sports clubs

Qatar Sports Investment has confirmed through its executive director that “many sports entities” have contacted the organisation regarding similar deals to the one signed this Monday at the Camp Nou. “We think today is the right time, with the right people and with the right approach” explained Ahmad al Sulaiti.