FC Barcelona has held a draw to name the members that will be able to watch matches in the 2010/11 season for free in the box of honour from January to June.

The vice president of the Social Area, Jordi Cardoner, represented the club at the latest Open Box draw, the initiative that allows members to enjoy the experience of watching a game from the best seats in the house.

This month’s draw was overseen by notary Xavier Roca i Ferrer and used a computerised system to name the members that will be enjoying this privilege from January until the end of the 2010/11 season.

“The Open Box project offers the chance for members to watch and enjoy a match from the box and that doesn’t just mean enjoying the match, but also enjoying everything else that goes on in this space”, said Cardoner.

All members have a chance 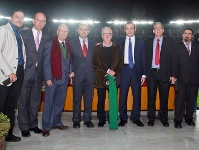 These draws are held twice a year, and there is no need to sign up to enter. Any member could be in for a pleasant surprise. “A lot of people don’t know that this system has been operating for eight years. Some winners can’t believe what’s happened, but it is possible, and we want people to know that” said the Social Area represntative.

“We have anecdotes of people that have come a long way to enjoy the Open Box, we have had Japanese people that have travelled just for this. Barça fans are unlike any others, they have sentiment and emotions, and that’s because of initiatives like this” said Cardoner.

When members arrive in the box, they are welcomed by the vice president himself, and also president Sandro Rosell. They are welcomed and pose for a photo as a memento of the occasion, which is given to them in the moment as a gift from the club. “It is important for them to keep this, as a souvenir of the experience and emotions” said the board member. 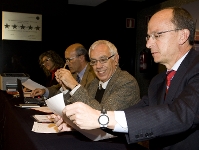 Click here to see the list of lucky winners that have allowed the club to publicise their names.