The prestigious British football magazine has published an extensive report and three interviews with FC Barcelona. Guardiola, Busquets, Iniesta and Villa feature prominently in the text.

Barēa are having a major media impact. ‘Four Four Two’ magazine has just printed a huge report on the club, with a circulation of 100,000 copies in the UK and Ireland, tells it all: David Villa appears on the cover, with Andrés Iniesta and Gerard Piqué behind him.

Inside there is a major report on the club, titled ‘Barēa Confidential’, by writer Andy Mitten. He explains the change of presidency last season and the changes that it produced, and some of the earliest decisions made by Sandro Rosell.

Four Four Two highlights the work done by Pep Guardiola at the helm of the first team. Apart from titles, the focus is also on his innovative approach, such as travelling on the same day of matches. Mitten also describes how so many players are groomed in the Barēa style at La Masia and the way 14 members of the treble winning side were products of the club’s own youth system.

Much of the article analyses the way the Camp Nou lives and breathes match days. The writer is based in Barcelona, and in particular focuses on a game played at home to Mallorca earlier this season, where he describes the buzz in the ground, with interesting references to the typical Catalan psyche and his inevitable fascination with Leo Messi. 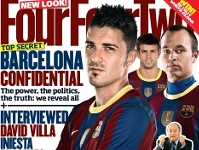