‘Barça. Estem fent histňria’ is a large format book that collects the magical moments of the last year at Barça will previously unpublished personal photographs of the Barcelona players.

The book is in chronological order and starts with the European and Spanish Super Cup titles won in August 2009, the preludes that wonderful night in Abu Dhabi. The book concludes with the celebration of the 99-point league, another Spanish Super Cup and also the disappointments against Sevilla and Inter in the Copa del Rey and Champions League.

It provides an intimate look at the squad in places such as the dressing rooms, team camps and away trips. Barça. Estem fent histňria includes pictures of the whole year at FC Barcelona that will treasure for posterity a team that has won eight trophies in just two and a half seasons. 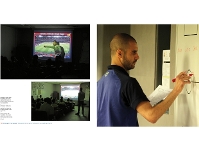 With pictures by official club photographer Miguel Ruiz, and texts by writer Raül Llimós and plenty of quotes from the players and staff, the book shows how Guardiola’s historic side operates from within.

The FC Barcelona first team, the stars of this publication, already received their copes a few days ago.

After the success of the book Barça. El millor any de la nostra vida the protagonists of this unique, visual and gripping tale are once again the players, coaches and assistants of the football first team. 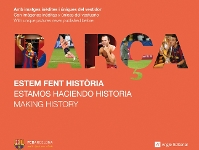