The Presidents of Barça and Real Madrid, Sandro Rosell and Florentino Pérez showed the good relations between the club when they had lunch together today ahead of tonight’s big game.

Once again, the maximum authorities of both clubs led by example, calling each other friends and posing for the cameras with a hug. On the sporting front, Sr Rosell reckons tonight’s match “won’t be decisive”, whilst Sr Perez expressed his belief that the game would be a party and that the two teams would live up to expectations. 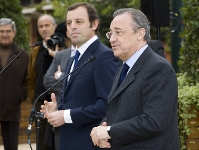 It’s Sr Rosell’s first classic as Club President and he explained: “it’s a pleasure to receive Madrid into our home and together for us to put on a game that is of worldwide interest. We have to show that we are two great rivals who are dedicated to playing football and demonstrate that it’s the game which both brings us together and sets us apart”. The President said he was expecting: “a spectacular game played in the spirit of fair play” and once again called on the fans “to get behind our team”.

Pérez hoping for a win 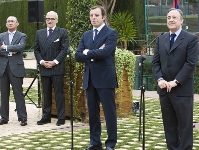 For his part, Florentino Pérez echoed Sr Rosell’s words and claimed he was “in love with this city and this country. I come here nearly every week and any excuse is good to be here. If I’m also alongside my friend Sandro Rosell, then that pleasure is complete”.

As for the game itself, the Madrid President said: “it’s a pleasure to play against this great Barça team”, but insisted: “we always come here with the intention of winning. I’ve seen Madrid win here more than once as President and we come here excited about that happening again”. 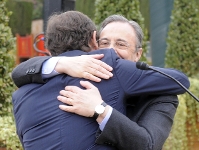 With both Presidents having busy schedules, the two met at the the Reial Club de Tennis Barcelona, rather than as had originally been planned at the Sala Paris at the Nou Camp, just before the traditional lunch held by the two boards.