The Fundació FC Barcelona have organised a series of events to help promote the fight against AIDS before, during and after el clásico as they plan to distribute red ribbons, show a video and collect donations from the fans.

World AIDS Day is celebrated on December 1 and the Fundació FC Barcelona believe that the game between the Blaugrana and Real Madrid on Monday is an ideal platform to inform the public about their aim and what the club is doing to help.

Traditional red ribbons tied in a bow, the symbol of the fight against the AIDS pandemic, will be distributed in the stands at Camp Nou and the PA announcer at the ground, Manel Vich, will highlight the commitment made by the Fundació. Shortly before kick-off and huge banner will be unfurled on the pitch with the message 'Barça standing up to AIDS'.

A video will then be shown on the giant screens inside Camp Nou to promote the Fundació's projects against AIDS and supporters will be advised that they can join in by sending a text message with the word STOP to 27070. Each SMS will cost €1.42*, including IVA, and the money will go to the HIVACAT programme via the Fundació. 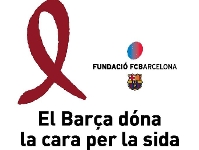 The Fundació FC Barcelona has organised the events before el clásico as part of their 'Barcelona standing up to AIDS' programme that is being directed by Doctor Bonaventura Clotet. Since the first case of AIDS was diagnosed in 1981 around 6.4 million have died of it worldwide and more than 40 million have been infected.