Rosell with supporters clubs in Badalona and Terrassa

Rosell with supporters clubs in Badalona and Terrassa

Club President Sandro Rosell visited he Terrassa and Badalona Penyas who were celebrating their 55th and 50th anniversaries this Sunday.

It was a big day on Sunday for two of the Club’s Supporters Clubs, with Badalona reaching their 50th anniversary and Terrassa its 55th in the presence of Club President Sandro Rosell. 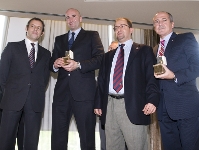 Sandro Rosell attended the celebratory lunch held by the Badalona club and was accompanied by the ex-footballer of the 1970s and 80s Tente Sánchez and 90s basketball star from the 1990s, Roger Esteller. 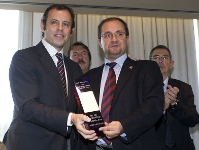 In his speech to the supporters club, Sr Rosell compared the first team to: “a transatlantic liner. Guardiola and the players are the motors on the ship and make it move at such a great speed”. The President also commented on the economic situation of the club and using the same metaphor explained: “the boat had some holes in it and our job is to fix those holes. We are doing that, we’ve sorted some out and over the next few years there will be none left”.

The President raced off after lunch to personally congratulate the PB 1900 Terrassa Supporters Club on its 55th anniversary at its celebratory event. 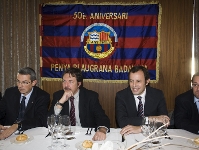 President Sandro Rosell has spent a full weekend with the supporters clubs, having taken part in a charity supper in Totana on Friday evening.