FC Barcelona is proud to be one of the first clubs to officially join Lionside Football, the best FREE football game on Facebook.

This great new social game allows you to play against your friends, fellow Barça supporters and other fans all around the globe on the world's largest social network.
Complete challenges, taunt opponents, and train your team to show your support for Barça. There are also weekly fixture challenges linked to our real matches for a chance to prove that you're our biggest fan. There are loads of new features to unlock, so keep playing and stay tuned for exciting special offers as well.

Lionside Football allows Barça fans to support both the Club and players on Facebook by leveling up, competing with your friends and taking on other teams from La Liga and Europe

"We are delighted to have Barça as one of our inaugural partners. The fans are fantastic - something I witnessed first hand at Camp Nou earlier this year - and it's particularly exciting with Barça fans already showing their support making the Club the most supported in the World on Facebook" said Doug Scott, Founder and CEO of Lionside.

Dídac Lee, FC Barcelona Board Member of Technology Area, added: "We have committed to being at the forefront of social media, giving our fans the opportunity to interact with the Club through new platforms such as Facebook and Twitter. Lionside Football give fans an opportunity to interact with their friends, family and fellow Barça fans, whilst also being rewarded with virtual and real world offers for demonstrating support for the Club."

To celebrate the launch of Lionside Football, Barça fans have the chance to receive special gifts including Messi, Villa, Puyol, Hernandez and Iniesta in your team, gold coin bonuses, and many other superb special offers to choose from. 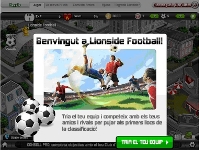