V.I.P.s in the directors’ box

V.I.P.s in the directors’ box

Former Barça players and the synchronised swimming team were among the guests invited to watch the Blaugrana play Ceuta from the director’s box alongside the football stars not chosen to play.

Pep Guardiola’s side took on their Segunda B visitors for the second leg of their Copa del Rey tie and there were several well-known faces looking on. Ex-Barça striker Migueli, who was born in Ceuta and now works for the Camp Nou outfit, enjoyed the game. “One is the team from where I was born and the other gave me everything,” he explained. “I have divided loyalties, but I hope that Barça wins.” 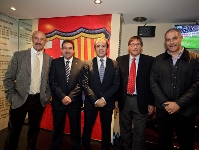 Xavi Hernández is hot on the heels of Migueli’s all-time appearance record for FC Barcelona. “It is normal that someone will take the record because people are pushing all the time and it is only an anecdote to have the record number of games,” he continued. “I would be happy if Xavi took it though and I was second, that would not be bad.”

With Migueli in the director’s box were other former Barça stars from the 1980’s such as Paco Clos and Juan Carlos Pérez Rojo, while Andoni Zubizarreta was in his usual seat as the club’s director of professional football. 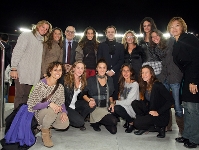 Anna Tarrés led the national synchronised swimming team as they took their positions in the esteemed position. The swimmers, who won four silver medals at the recent European games in Budapest, organised their training sessions for the week to allow them to be able to attend. “To come to the stadium is a bit different for us because our days are constant work and something like this brings us even closer,” Tarrés said. 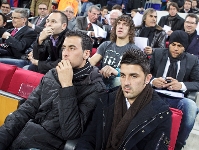 Dani Alves, Carles Puyol, Sergio Busquets, Andrés Iniesta and David Villa were rested for the game against Ceuta and were instead able to watch the game from the luxury of the directors’ box.