Pope Benedict XVI arrives in Barcelona today, where tomorrow he shall be solemnly consecrating the Sagrada Família temple. This is 28 years after his predecessor, the late John Paul II gave a mass at the Camp Nou to 120,000 believers.

On November 7, 1982 the Barça stadium witnessed a historic event, the first time a Pontiff had given mass in Catalonia. John Paul II’s visit was part of a wider tour of Spain, his first since becoming Pope in 1978. 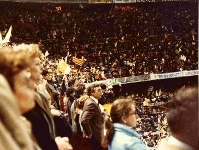 The Pope’s visit began with a visit to the Benedictine Abbey at Montserrat. By midday, he had arrived in the city and headed for the Sagrada Familia, where he recited the Angelus. After that, he went to the Cathedral, passing along Carrer Sardenya, Carrer Aragó, Passeig de Grŕcia, Ronda de Sant Pere, Plaça Urquinaona and Via Laietana. He blessed the huge crowd that had gathered in the Cathedral Square before going to visit the Archbishop. After lunch, at about 15.30, he left for Avinguda Maria Cristina where he was greeted by a million people as he made his way into the Camp Nou for his next religious duty.

Mass in the Camp Nou 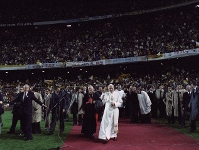 Sadly, the weather was less welcoming, and under pouring rain, a congregation of 120,000 gathered on the recently extended Camp Nou terraces. John Paul II entered the stadium at 18.30 via the south goal, and blessed the adoring crowds. The Pope stood on a 600 m2 covered podium in the middle of the pitch. A huge 3000 m2 scarlet and yellow carpet was decorated with yellow flowers. 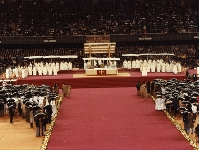 To the right of the huge altar assembled in front of the grandstand was a choir of two thousand conducted by the director of the Coral Sant Jordi, Oriol Martorell and a group of priests who later gave communion. To the left, some seven hundred sick people awaited the blessing of the Holy Father, while in the Palau Blaugrana, a further 4,500 sick, disabled and elderly people followed the service from afar. Before beginning the Eucharist, the Pope said “peace be with you” in the Catalan language, which certainly impressed the congregation. The stadium fell into silence for the mass, which ended with a singing of “Virolai”.

The Camp Nou box of honour gathered a number of local authorities and FC Barcelona directors. These included the President of the Generalitat, Jordi Pujol; the assistant councillor to the Presidency of the Generalitat, Miquel Coll i Alentorn and the Mayor of Barcelona, Narcís Serra. The FCB president, Josep Lluís Núńez and his wife enjoyed seats of honour near to the podium and were among the twenty people that received communion directly from the Pope. 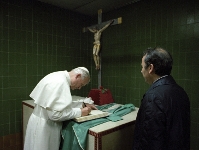 The Club presented the Holy Father with a package of surgical materials to be sent to the Third World. The Pope signed the club’s Book of Honour and presented a rosary to Josep Lluís Núńez. John Paul II was also presented with club membership card number 108,000. Years later, in November 2001, the update of the club register meant the Pope’s number became 103,350, which was the card he still had when he died on April 2, 2005. 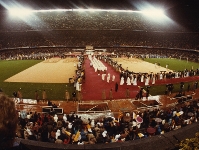 Second mass by a Holy Father in Barcelona

The mass to consecrate the Sagrada Família that will be given by Benedict XVI on Sunday will only be the second that a Pope has ever given in Barcelona. John Paul never came back to Barcelona after 1982, although he did visit Spain in 1984, 1989, 1993 and 2003. Benedict XVI, who became Pope on April 19, 2005, visited Valencia in 2006.