Club President Sandro Rosell praised the Nou Camp crowd at the game tonight, claiming their great support was a real factor in the team’s performance.

Following the convincing win over Seville, Sandro Rosell was quick to praise the attitude of the Nou Camp fans who filled the stadium despite this being a holiday weekend in Catalonia.

According to the Club President: “the team and the fans deserve a 10. The fans got behind the team even more than they normally do and that really helps the team to work well. The team inspires the fans and the fans inspire the team!”

“Pep was right about Villa”

This was David Villa’s night as he put to bed any doubts about his goal scoring with two great strikes and the President insisted that Pep Guardiola was right this week when he assured the fans that Villa would soon be back amongst the goals.

There’s a tough November ahead of the team, with some big games, including the visit of Real Madrid, but Sr Rosell made it clear that: “Barça have this kind of pressure all year round. We have to focus on ourselves move forward, keep on winning and piling up the points”.

Barça’s next test is the game in Copenhagen in midweek and the President commented: “it won’t be an easy game, but we are confident. The team is fitter – it’s working better and improving. A good result in Denmark will give us peace of mind about classifying for the next round”. 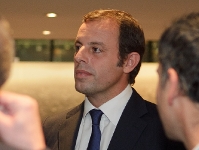