“We Give Everything” is the slogan that fronts the latest campaign by the club for ticket sales for the 2010/11 campaign, which is being launched this Thursday. The players are the front men for the campaign.

With the start of the new season, the players are again fully committed to give their all for the team on the pitch and that commitment is echoed in the campaign slogan, “We Give Everything”.

Commitment on both sides 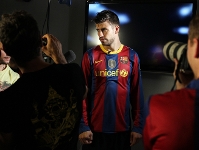 The aim is to get the fans to join the players in their dedication and the “We Give Everything” slogan, as used last season, aims to stress the implication of the team. This season, the players won’t be wearing the tattoos they did in last year’s campaign – the images this year are of the players faces and shirts full of sweat.

The players show their commitment through a number of scenes of them working and training to show the effort behind every game.

Pedro, Iniesta and Messi are the first group of players to feature in the campaign. All three of them express their commitment to defending the club and ask for the same support from the fans. The following players will soon be taking over from those three, with Xavi, Puyol, Villa, Alves, Piqué and Valdés all to appear. 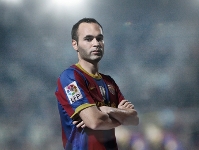 The success of the campaign will be based on the players’ ability to convince the fans to fill the stadium for every game and will be shown on BarcaTV, the club website, general and sports newspapers ,TV, radio, advertising hoardings and the advertising space around the stadium.

The improvement in attendances last season –an increase of 13% - convinced the club’s Marketing Department to repeat last year’s campaign and to successful slogan, “We Give Everything”.

For the third year on the run, the ad agency Caldas Naya has been chosen to promote the campaign. The photos of the players, were taken by the Diver/Aguilar agency in London, who are specialists in fashion and celebrity portrait photos of stars such as Adrian Body, Bjork or Lenny Kravitz.