UEFA and Barēa say no to racism

UEFA and Barēa say no to racism

UEFA are continuing the fight against racism this season and there will be a series of activities before FC Barcelona's game against FC Copenhagen on Wednesday evening in Camp Nou.

European football's governing body aim to eliminate the problem from the game and are highlighting the seriousness of it before each of the 16 matches in the Champions League this week. Working with partners Football Against Racism in Europe (FARE), the campaign will be given high-profile coverage as part of activities marking the Action Week.

Before Barēa's game against Copenhagen a message will be shown on the giant screens in Camp Nou and matchday announcer, Manel Vich, will read a statement supporting the cause. Both sets of players will take to the field before kick off sporting t-shirts with the anti-racism message while both captains will wear special wristbands.

FC Barcelona are helping the anti-racism initiative as one more aspect of their alliance with UNESCO through the Blaurgana's Fundació. The Fundació have helped to take the subject to the European Parliament with a programme called 'the voice of the young against racism'. The outcome of the project led members of the European Clubs Association to include anti-racist clauses in the contracts of their players. Now the Fundació is planning a new venture with UNESCO for this season. 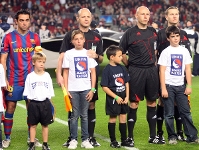