FC Barcelona director general announced that the club's budget for the 2010/11 season predicts losses of €21.4 million after tax and saw the plan approved by a resounding majority at the general assembly on Saturday.

"This is the first crucial step towards announcing profits next year," he told club members in the fourth order of a busy day at the Palau de Congresos. "This is not easy in the current worldwide economic situation." The move was approved by 96 per cent of the vote after Rossich had explained: "This budget is credible and realistic and will be operated with complete responsibility and within the criteria of maximum prudence. There is no contemplation to sell players." He stated that income of €420.2 million is foreseen with expenses of €428.1 million (€58 million less than last term). 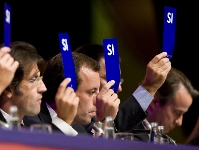 Rossich explained that the final net result would be negative due to the €33.4 million loss made on the transfer of Zlatan Ibrahimovic. "President Sandro Rosell added: "It is the worst economic operation Barça has ever made," he stated. But I think that we do not sell badly, we buy badly."

Ramon Adell, the president of the Statutory Economic Commission, then revealed: "the 2010/11 budget would produce a profit if it were not for the loss of money on transfers." 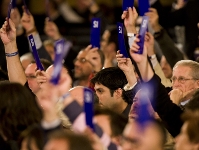 "We are ambitious when it comes to expenses too," Rossich continued. "We will have out-and-out austere management." He then produced a long list of cost-cutting measures including putting out all lights in the club's offices at night which would help achieve a 13 per cent drop in ordinary expenses. These expenses have been calculated to include the first team winning the title, reaching the semi of the Copa del Rey and the quarter finals of the Champions League.

Rossich then clarified that the reduction of costs would not affect the sporting budget. "If we have to change the pitch then we shall do it as many times as is necessary."

"The aim now is to resolve the economic structural problems within the club over the past few years," Rossich said. "We have to start making money again in a normal way and that takes time." he then highlighted that the amount of €420.2 million was €5 million more than a year ago. The club intends to exploit the underground car park on match days.

On investments to be made Rossich explained that these will go towards the Ciutat Esportiva, the improvement of all sporting venues and to improve the management system for sport, medicine and operational procedures. As i previous years the club would contribute 0.7 per cent of income to the Fundació. 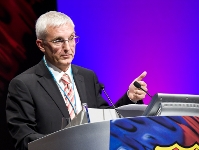