Previous board called to respond

Previous board called to respond

The FC Barcelona compromisarios have voted to enforce the social action of responsibility against the club’s previous board with 468 finding in favour, 439 against and 113 abstaining.

Joan Laporta’s board were in charge until June 30 this year and have now been called upon to respond in the courts. In what was a historic vote all arguments were heard before the count was made and the final figure showed that the motion was passed and proceedings would begin. 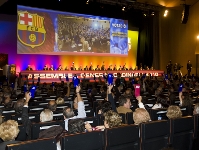 Sandro Rosell gave the board of directors the freedom to vote assumed personal responsibility and answered the doubts of the delegates on the matter. In a personal decision a a written document was shown on the big screens with four arguments in favour of the social action of responsibility and five against. In the end he chose to abstain.

Before the voting took place the FC Barcelona president asked the members to think about Barça in the same way that the former director Evarist Murtra said to Guardiola when he took charge of the first team.

"This is a highly important social decision in the history of the club," Rosell explained. "There is nothing agreeable about all this. Personally I am having a bad time with it all." 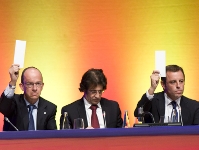