Supporters Clubs have their mascot

Supporters Clubs have their mascot

The Supporters Club Convention was held as part of the Trobada Mundial held in Donostia and the Fundació, the Campus de les Penyes and their new mascot were the principal items on the agenda. 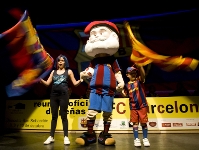 Throughout the month of September, members, Supporters Club members and fans have been voting between the two options presented at the World Congress held during the Gamper Day for a new mascot. Of the 1.673 votes cast, 868 went for the “Avi del Barça” surrounded by his grandchildren. Gemma Larrčgola, the designer of the Toons, announced the result and explained: “so many of you have voted and we are very happy with that. This mascot represents the family and the spirit we are enjoying in this Trobada”. 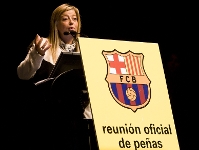 The Director General of the Fundació del FC Barcelona, Josep Cortada, accompanied by Josep Maldonado, who is a member of the Patronat de la Fundació, explained the work of the foundation and its objectives and stressed the importance of the Supporters Clubs in this area: “we believe that the Fundació should be a participatory space and that all the members and Supporters Clubs should help us decide how we use our resources in an austere and transparent manner”.

One of the Club’s objectives is to get young people involved in the Supporters Clubs and ex-player Julio Alberto, who is the Director of the International Area of the FCBEscola, explained to the meeting the importance of encouraging sport amongst young people through the Campus de Penyes and explained the technical and pedagogical work the Escola is committed to. 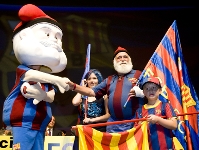 Cardoner happy with the event

Jordi Cardoner has been a vital part of this event and explained that having re-organised the Supporters Club Department he now wants the Clubs and the Club to work together to enable the Supporters Clubs to be self sufficient. In addition, Sr Cardoner expressed his satisfaction with the event: “for me, this is where you see how we start to win leagues - the atmosphere is so great and full of support for our Club”.