Chronology of 100 days in office

Chronology of 100 days in office

This Friday is the 100th day since Sandro Rosell became president of Barça. The Board has been a hive of activity in this time.

The following are some of the most relevant events in this time for the club, from an economic, sporting, institutional and social point of view.

July 1
► Coming into office: Rosell took up his role as president in a solemn ceremony, attended by several personages, in the Masia gardens.

July 2
► First press conference: In Sala París, Sandro Rosell speaks to the media for the first time as president of Barça.
► Visit to Barcelona Council and the Generalitat de Catalunya: the new Barça board visits the main institutions in the city and country.
► Presentation of Football Area: The vice president for sport Josep Maria Bartomeu explains the new sports organigram.

July 3
► Visit to Montserrat: The Board visits the Abbey and Rosell spoke about the similarities between Montserrat and Barça.

July 22
► Agreement with Sharp Electrónica Espańa: Fruit of the agreement, the company gives LCD televisions to all of the supporters clubs aged over 50 years.

July 25
► The Supporters Clubs Advisory Council returns to work: Sala París hosts the first CCP cince the nomination of the new board.

July 28
► Josep Cortada, new director general of the Foundation: The changes to the FCB Foundation are announced at a meeting of its directors.

July 31
► Farewell to Rafa Márquez: The Mexican centre back leaves the Club at an emotional ceremony in Sala París.

August 21
► Spanish Super Cup, first football title of the season: A resounding win against Sevilla (4-0) brings the Super Cup back to the city.

August 25
► XXXI Barcelona Supporters Clubs Congress: Rosell shows his support for the ‘penyes’ at a Congress held on the day of the Joan Gamper Trophy.
► Joan Gamper Trophy: The Camp Nou gets the chance to give Ronaldinho the send-off he deserved and see the team beat Milan on penalties.
► Adaptation and improvement of women’s facilities in the stadium: The improvement of many areas of the Camp Nou include the women’s bathrooms.

August 28
► Barça B make Division 2A debut: The reserves get the campaign at the new level off to a winning start away to Celta Vigo (1-2).

August 30
► Presentation of Mascherano: The Argentinian is the third and final signing of the season, arriving to add depth to the midfield.

September 1
► Sandro Rosell visits USAP Perpignan: The two clubs open the doors to future associations including the possibility of the Camp Nou hosting a French Rugby Championship match in early 2011.

September 6
► Josep Maria Prat named by Board as Club’s cultural councillor: A newly created position to take charge of the Barça Culture section.

September 7
► Presentation of Ethical Code: The Board creates an Ethical Code for the proper governance of FC Barcelona.

September 9
► The Museum receives 20 millionth visitor: Mňnica Ruiz is the lady who gets this unique and historic honour.

September 24
► Presentation of first gold badges: To coincide with the Mercč festival, Rosell presents golden badges to 186 members for whom 2010 is their 50th as club members.

September 25
► Win in ACB Supercup: Regal Barça get the second trophy of the season after the Catalan League by beating Madrid and Power Electronics Valencia in Vitoria.

September 30
► Messi receives Balon d’Or: The Argentinian gets the trophy for being the highest league scorer in Europe last season. Rosell says: “We’ll never let you go. You’ll always be with us”.

October 2
► Inauguration of the Supporters Clubs Services Office: The new offices on the Camp Nou forecourt are opened, which will reinforce the relationship between FCB and its supporters clubs.
► Tribute to the Barça of the Five Cups: Before Barça v Mallorca, the surviving members of that historical team, plus the widow of Eduard Manchón, are guests in the box of honour. They are given a standing ovation in the Camp Nou. 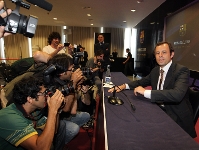