Barēa in the Muscletech Network Workshop

Barēa to participate in the Muscletech Network Workshop

FC Barcelona will participate in the second Muscletech Network Workshop from Monday as the course on learning to diagnose, treat and prevent muscular injuries and tendonitis starts.

Over the following three days, September 27, 28 and 29, around 50 international experts and Catalan scientists will discuss the current state of their fields in order to be able to improve the basic treatment of muscle and tendon injuries and to implement improvements on the ground.

Muscletech Network is a scientific platform put together in association with FC Barcelona and Leitat Technological Centre and the Secretary General for Sport in the Generalitat de Catalunya with the support of La Caixa’s Obra Social.

On Monday Barēa will be represented by the director for the sports area and the director responsible for the medical area, Jordi Monés.

The first day of the event will last 12 hours and be in the Mueso Colet. The vice president of the government of the Generalitat de Catalunya, Josep Lluķs Carod-Rovira will join the head of the Leitat Technological Centre, Eusebi Cima, the director of the area of science, investigation and health at the Obra Social La Caixa and the president of the executive commission of Biocat, Manel Balcells. 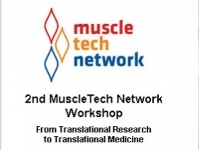 FC Barcelona will publish a muscle injury guide to coincide with the Muscletech Network event. It will be presented by the Blaugrana’s first-team medic Gil Rodas.