Gasol: "Barēa has a fantastic team"

Gasol: "Barēa has a fantastic team"

NBA star Pau Gasol was in the Presidential Box on Tuesday evening to witness Barēa’s debut game against Panathinaikos in this season’s Champions League.

The LA Lakers and former Barēa player is currently enjoying a break in Barcelona and seized the chance to visit the Camp Nou and watch the game. He told us: “I really wanted to see Barēa play this year because normally I don’t get the chance”. 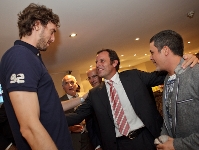 However, he does his best to follow the fortunes of Guardiola’s team from his home in the USA: “Barēa has a fantastic team. They’ve had two really good seasons. Hopes are very high but we’ll have to wait and see what happens but this team is exciting and gives the fans a lot of enjoyment”.

Pau Gasol also gave his views on the current state of the Barēa basketball section. “Xavi Pascual has a great team. They didn’t win the league last season but they did win the Euro league and the Kings Cup and that’s very positive”. He believes Regal Barēa still has an excellent team this season, “and that’s a luxury for the Barēa fans”.

In the next few days, Gasol will be taking part in the NBA’s 'Basketball without borders' initiative, aimed at young people in situations of risk. He told us: “I love supporting basketball and to see young people getting involved, enjoying themselves and being motivated”. 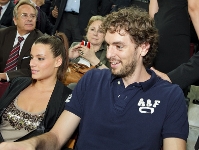 Spanish pop star Alejandro Sanz and soprano Ainhoa Arteta were also present in the Presidential Box. Sanz admitted that it was his first visit to the Camp Nou and described the team as “a perfect symphony”.

Ainhoa Arteta revealed she is a Barēa fan: “I love watching Barēa’s games. I didn’t use to like football but because of Barēa, I’ve learned to love it”.