A 25 year old girl from Lleida became the 20 millionth visitor to the Barńa museum on Thursday. Her name is M“nica Ruiz.

It was just after 12.00 midday when 25 year old M“nica Ruiz from Almenar (Lleida) passed through the ticket offices with a friend and wearing a Xavi shirt. M“nica was welcomed by Javier Faus, economic vice president of the club, and received a giant ticket that credited her as visitor 20 million. The media were there to record the moment for posterity. Said Monica, “it was quite a surprise.” She added that she had no idea that the Museum was expecting history to be made that day and that she felt delighted though a “little crazy with so many emotions”. 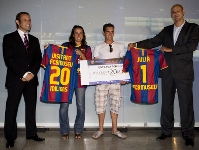 Monica was introduced to JuliÓ Bretos, who on September 24, 1984 became the first ever visitor to the museum. She was there to hand over the first ever ticket to be sold for the FC Barcelona Museum.

After receiving the 20 millionth ticket, Monica was given a tour of the stadium and was allowed to walk on the Camp Nou turf, where as a special treat, she was taken into the first team dressing room. Before the visit, president Sandro Rosell came down to meet M“nica and JuliÓ in person and present them with a special commemorative shirt to honour the historic event. 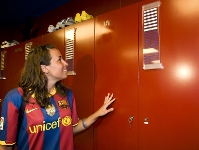 But that was not the end of it. M“nica also got two tickets for the match on Saturday against Hercules and a gift voucher worth 300 euros to spend in the FCBotiga, which was specially opened for Monica to choose the Barńa goodies she wanted. 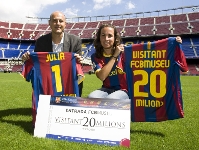 To finish off such a special Thursday, M“nica will be taken to the Ciutat Esportiva Joan Gamper where she will be meeting Xavi Hernßndez and having her photo taken with her hero – a veritable dream come true for the museum’s historic 20 millionth visitor.