Sandro Rosell told fans that he will honour the pledge to make Barça's supporters' club a priority as he addressed the Congreso de Peńas (Supporters' Clubs Congress) 2010 on Wednesday.

The Blaugrana president began his address by explaining that would speak in Spanish to allow fans outside of Catalunya to follow. "Catalunya is a respectful place and that is why I will talk in a language that practically everyone can understand," he said. 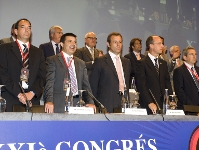 Outlining his two main aims, Rosell continued: "I want to promote human relations. We want to see each other because are a family and families should meet up more often than just at Christmas. These congresses should become a way to communicate and meet up as it is the best way that we Barça know how."

Rosell then look at some of the different areas of the club that he believes are important such as social, sporting, institutional and economic.

Economic area: Turning it around

On the club's financial footing the president explained what his board found when they took over. "We are not in a good situation," he revealed. "We are not great, but it is not something that cannot be resolved. We are ill, but we will get better. We will redirect the ship and do things through austerity. We have overstretched ourselves and paid the price.

"That means that we will have to trim in other areas," he added before explaining that two schemes that would be put on hold will be a new Palau Blaugrana and the restructuring of Camp Nou. "There is nothing that will stop us smiling, but the situation is not simple. We will turn it around though," he added. 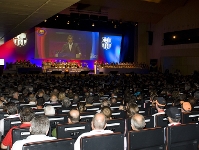 On the sporting area of the club Rosell was full of praise for everyone involved with the first team squad. "We have a great side," he explained. "We also have a coach who appears to have come from the heavens. The squad has improved and we have invested €49 million in players by bringing in David Villa and Adriano. Between now and the end of the month there maybe one more addition or maybe not."

Rosell also had words of praise for B team trainer Luis Enrique, who he also wished all the best for the second team's first term back in Segunda A. "The board will give everything structure, support and encouragement and we will always speak well of our players and coaches because they are ours," he stated.

As well as supporting the professional sports teams, Rosell is keen to ensure that the amateurs are looked after. "We want them to be better off so when they visit your town or city please go and support them. We are a club with more than 1,000 sportsmen and women and we have an obligation to support them all."

On the institutional front the president believes that: "Barça should be above the people and that relations should be conducted institution to institution," he explained. "We want to recover our relations."

Social area: Ambassadors for the club 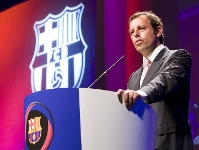 Keeping in mind the event on Wednesday Rosell referred to the social side. "This is what maintains the club," he said. "The supporters' clubs are the ambassadors. It is fundamental that the world of the supporters' clubs functions like clockwork. We have to give them strength.

"People want to participate and want to be part of Barça and Barça wants them," he continued. "We need you, we want you, we love you. The members, supporters' clubs and fans of FC Barcelona we are who we are and we are Barça." 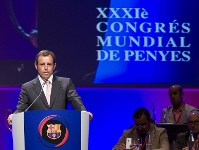 During his speech to the supporters' clubs congress president Sandro Rosell asked for a round of applause in honour of the club's coaches and players after winning the Spanish Super Cup and for the 1,547 supporters who were present.