A Belgian couple have called their first son Barça and he has already become the first club member to have the name. The pair told the media they chose the moniker because "they liked it".

Taking inspiration from the verse "tinc un nom que el sap tothom, Barça, Barça, Barça" (I have a name that everyone knows, Barça, Barça, Barça) from the Blaugrana hymn the new arrival has the full name Barça Beeckman and he lives 60 kilometres outside of Brussels in Nieuwerkerk. Aged three the youngster was made a member of the Camp Nou club on July 19 by his father Wesley Beeckman, 23, an architecture student, and mother Anneke Maes, 24, a nurse. 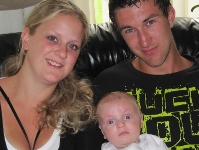 During the pregnancy the couple could not reach an agreement for a name for the baby as they did not want to know the sex until he was born. In the end they settled on the name Lona if the baby was a girl.

With a decision about the name if it was a boy in full swing the pair were watching Pep Guardiola's team play when Anneke had a bright idea. "Suddenly, I said to my husband that if we had a boy then would he want to call him Barça," she explained. "He turned towards me and winked before saying 'yes, that is the name of my son'".

On April 26 Anneke gave birth in Sint-Truiden and Barça came into the world. "We were convinced that it would be a girl," Anneke continued. "My family did not know what to say at the start and they were not keen, but now they are used to the name. People had to ask me twice what his name was early on and everyone has said it is the first time they have heard the name used." Wesley's relatives were happier. "My father liked it as soon as he heard it," he stated.

Despite the relatives' initial dismay the couple are "very proud that our son carries the name of the best football team in the world" Anneke commented. Anneke and Wesley are keen FC Barcelona fans and he plays for his local team VCT Terkoest Alken.

"We hope that when he grows up that he will like his name and understand why we gave it to him," Anneke added. 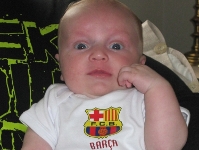 Barça Beeckman is the first member of FC Barcelona to be named after the club and is now number 185,508.