Visit to the Shanghai Expo 2010

Visit to the Shanghai Expo 2010

A delegation from FC Barcelona visited Shangai to see Expo 2010 on Friday morning and made a trip to the Barcelona pavilion.

In what was an intense day for the directors an early start was required in order to catch an internal flight to see the World Fair in the Chinese city where the Catalan capital, Spain and the Basque city Bilbao all have stands. Vice president Josep Maria Bartomeu was joined by directors Jordi Moix and DĒdac Lee and sporting director Andoni Zubizarreta on the trip and was met by Isabel Blanes, who is organising the Barcelona stand at the expo. 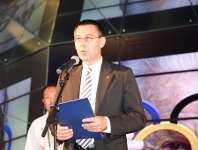 The party then travelled to sign a book of commemoration in honour of former Olympic president Juan Antonio Samaranch. The former head of the COI was a Barńa club member and played a role in signing many of the agreements between the club and a number of Chinese companies and institutions.

Bartomeu then made a speech in which he thanked the organisers for the invitation at the Magic Box housed in the State Grid Pavilion. The directors then posed for photographs in front of a shot of Samaranch. Beside them two torches were held aloft to represent the Olympic Games of Barcelona in 1992 and of Beijing in 2008.

During the trip the party also visited the Spain pavilion, designed by Barcelona-based architect Benedetta Tagliabue, and then saw the Bilbao pavilion too. Making the return trip to Beijing was the last order of the day as the delegation headed to the airport to catch the last flight. 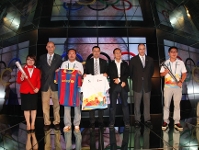 Barcelona has been a twin city of Shanghai since 2001 and is a supporter of the Expo 2010. The Barcelona pavilion at the event is shared with Beijing and Hong Kong and is next to the Taipei pavilion where there is a replica of the Gaudi dragon that stands in Parc G³ell.

Covering an area of 1,000 square metres the Barcelona pavilion outlines such things as the development of the Ciutat Vella and 22@Barcelona as well as highlighting all the best points of the Catalan capital.