FC Barcelona Vice President Josep Maria Bartomeu has signed a number of deals and letters of agreement with various Chinese entities with the aim of increasing the club’s presence in China.

Barça’s social commitment and their work with various NGO projects proved to be of considerable interest to the Chinese audience at a formal event held at the Crown Plaza Hotel in Beijing in the presence of Sr Bartomeu and the three other board members present on the Tour, Jordi Moix, Dídac Lee and J. Ramon Vidal-Abarca). 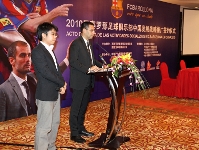 After a video presentation outlining the principle lines of action of the Fundació, Sr Bartomeu explained the main areas of solidarity work the club is involved in and stressed the importance of the agreements signed in Beijing: “Sunday’s game is important, but these agreements will help make the relationship between Barça and China deeper and more long lasting”.

The agreements signed are with:

The organisations concerned and the club interchanged commemorative gifts to celebrate the agreements and amongst the most impressive was an Olympic Torch from the 2008 games presented by the China Sports Foundation. 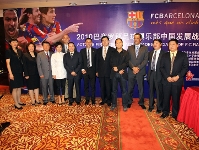 The event was also attended by the Fernando Arias on behalf of the Spanish Embassy, who concluded: “Barça is the best diplomatic representative of Spain. It is a great club and it transcends its own economic and social background”.

For Sr Arias, these agreements show: “the fact that Barça is a socially advanced club. If everybody did a little bit more, as Barça do, the world would be a better place”.