Last Friday in Rio de Janeiro, La Fundación FC Barcelona presented the programme “Alliance for Sport and Development Towards the 2014 World Cup and the 2016 Olympics”, to promote social development in the city’s “favellas”. 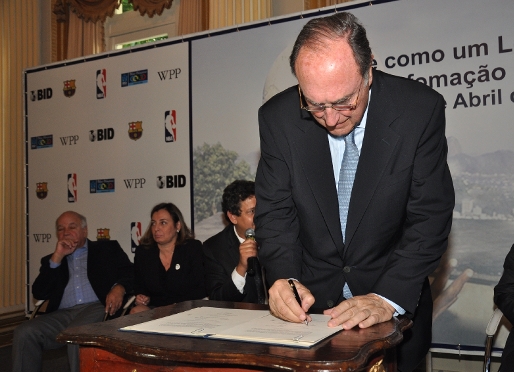 FC Barcelona director Ramon Pont signing the alliance between the Fundación and the IDB in Brazil. Photo: FCB

“Alliance for Sport and Development Towards the 2014 World Cup and the 2016 Olympics” is the name of the project which the Fundación FC Barcelona is promoting in Rio de Janeiro, together with the IDB (The Inter American Development Bank), the Mayor of Rio, the NBA and the Fundación Mapfre and which was unveiled in the Brazilian capital on Friday.

This alliance will strengthen 18 'Vilas Olimpicas' in Rio de Janeiro by promoting social inclusion through sports activities. The initiative will draw experiences from best practices by utilizing sports as a vehicle to improve the lives of children in need and promote physical activities for conflict resolution, violence prevention, education, health, among others.

The pilot programme for the project will be developed during 2011 at the Alemao project, one of the most deprived areas of the city. The aim of the project is to contribute to the legacy of the World Cup and the Olympics and to an enduring development impact in the city.

According to the City of Rio, 140,000 people from the most vulnerable areas will be able to benefit from this project.

"We believe that FC Barcelona and its Foundation, together with regional and local counterparts such as the IDB, can develop very interesting projects in Latin America and the Caribbean, using football and its values as an excellent social tool" said Ramon Pont, "we cannot ignore the need to provide a better future for the new generations in this region, we must work together to achieve this vital goal and football can bring children together and help strengthen local networks in favour of young people and children."

"The project will contribute to the legacy of the World Cup and the Olympics and to an enduring development impact in Rio and in Brazil," said IDB President Luis Alberto Moreno. "The IDB has helped train thousands of youths in our sports for development programs and we've seen how sports can help a community develop in an integral way."